I love how the sound of the dishwasher always makes Arie fall asleep.

And speaking of sounds, my parents were telling me yesterday about a story they saw on the news the previous night.  apparently, a personality/pet peeve/quirk I've always had is actually a real thing.  We always just thought it was a "me" thing.  It's called misophonia.  I can't stand hearing other people chew.  And i know, you'll say that no one likes to really hear another person eat.  but we're talking, even polite eaters.  chewing with their mouth closed.  The noise of them chewing just stands out and is LOUD to me and I CAN'T STAND IT!  it makes me ill.  If I'm eating at the same time, i have to stop eating. 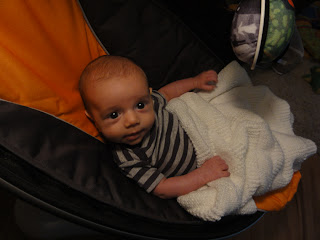 Poor Josh--If I'm sitting next to my husband during dinner, then the TV has to be on to drown out chewing noises.  Otherwise, I get physically angry and annoyed and shoot him very angry looks for just chewing his food like a decent human being.  It's 100% an anxiety thing.  Always knew it was, just didn't know it had an actual name!  If we're having a snack in the living room..we sit on different sofas until snack time is over. 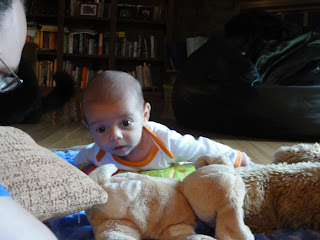 Oh, and don't get me started about listening to people drink hot coffee.  I freak out in movie theaters--listening to people crunch popcorn.  i just focus in on those mouth sounds and can't distract myself away from listening...it's all i hear.  I usually end up clamping my finger nails into josh's arm if he's nearby.  Fortunately, Josh has always been very understanding of this trait of mine and knows that i can't really help it.  he tries to help me just 'chill out'..but it does lead to some crazy moments (switching seats with me in the middle of "Wicked" when were in London, as the lady next to me was slurping her ice cream she bought during intermission.  Making me get liquored up on a trans-atlantic flight so that I didn't strangle the person eating next to me.  you know.  silly things like that).  as you can see, it inflicts a kind of rage response from me.


I know.  I'm weird.  I'm an artist, that's all i can say.  So how about some cute baby pix to help show that I can be normal (for what it's worth, i like hearing my nephew and my Arie eat.  I find their eating sounds reassuring.
don't ask why)

Arie turns 12 weeks in a couple of days...and he's around 9lbs now.  Pretty honkin' huge compared to his 5.75lbs at birth!  He's doing so, so well.  Despite having such a fun job, it's still a job--and so i have a bit of contempt for it at the moment as I'd rather spend all day playing and cuddling with Arthur!  At least I get to work from home and get to at least be around him all day.
Posted by Ann Clough, The Crown Lady at 9:10 AM