We decided to start taking advantage of josh's allotted days off...and noticing a string of gorgeous days out here, we took off to the South of England for a long weekend.

We left Saturday morning, and keeping with our tradition, we were able to stop for our typical "Start of a car trip McDonald's Breakfast".  (The McD's out here don't have biscuits (as biscuits mean cookies out here), so egg McMuffins are served on "English" muffins.  They don' have McGriddles...It's a bagel instead.  So damn healthy!)

We started off driving slightly South East toward the city of Leicester (sounds like Lester).  Near that city is the Kirby Muxloe Castle .  While there, we signed up for an English Hertigae Membership, as it allows us free entry to all of their properties, and discounted entry to National Trust sites. (English Heritage seems to own most of the Ruins, whereas the National Trust seems to manage most of the still intact castles). 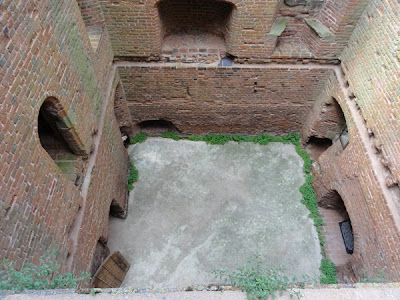 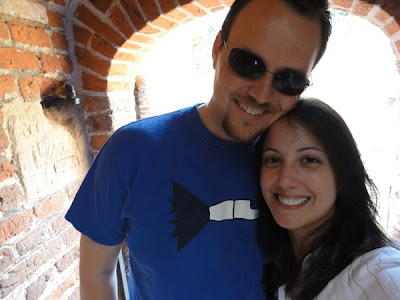 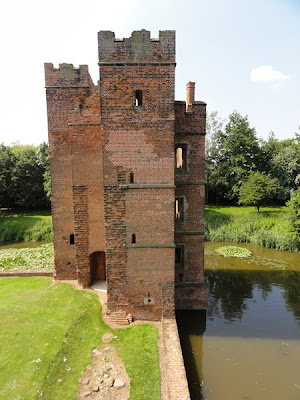 KM Castle was just gorgeous.  Very much in ruins, but still fully surrounded by its moat.    You're able to climb nearly all the way up in the side tower.  fantastic view.  It was neat to see the integrated port holes for cannons.  This castle was also different in that it was built of brick, not stone.  Brick was very rare at that time (the bricks for this castle were made on site), so this was quite the fashionable castle.  This castle was intended as a country home for Lord Hastings...the Lord of the last castle, Ashby-de-la-Zouch, but it was never finished.

Then we hopped in the car and stopped in Leicester.  We were on the hunt for a Toy store.  We realized that we really needed a lego Josh and Ann to visit all the sites with us.  we found the most amazing toy store and the Lego Josh and Ann.  we walked through an open air fresh produce market and heard all the calls of the various vendors.  we purchased about 5 pounds of apples for a mere 1Pound ($1.50).  Those apples came in handy many, many times through the rest of our trip (since we were going between sites, our gps routed us on the most bizarre back roads, winding through teensy villages.  it was amazing.  and the apples kept us from cannibalizing the Lego Josh and Ann).  A quick lunch and we were back on the road to Woodhenge and Stonehenge.

Woodhenge was a nice quick stop...not a whole lot to see there, and not busy at all.  Concrete posts now take the place of the wooden posts...it's speculated that these posts maybe held up a round building at one time. 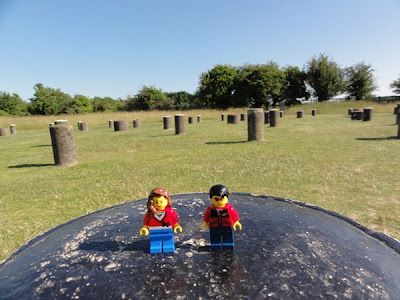 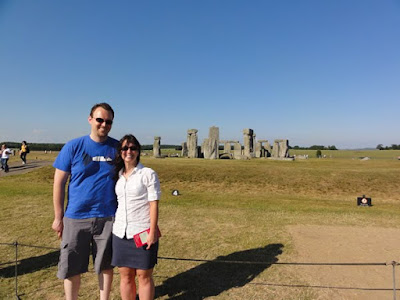 Stonehenge  Ok. Stonehenge.  we're glad we went.  But we were very disappointed.  It felt like you were getting into line for a carnival ride, or to enter a zoo.  It was packed, so commercialized, and generally a little disappointing.  We had read beforehand that the stones were roped off, that you weren't allowed to go right up to it.  We were pleased to see that the ropes were much closer to the site than we expected.  However, you had to stay on a pathway...they had both sides of the pathway roped off.  and there were a lot of people. so it was crowded, there were no benches where you just sit and appreciate the site.   We read in our complimentary copy of the quarterly English Heritage magazine that plans have just been approved to completely revamp the site.  We were happy to hear that that will be done.  Pictures in the magazine show a much more sympathetic approach, and generally a much less carnival atmosphere.

Then we jumped back in the car and headed down to Mount Lodge, our B&B in Canford Cliffs (B&Bs are cheaper here.  Hotels are the expensive ways to stay, just opposite of the US.)...near Bournemouth, England.  Teensy, Teensy room (like a cruise room), but it was clean.  so we were pleased.  As we drove into the city, though, we got there just as a fog was rolling in.  You could barely see a few feet in front of you. 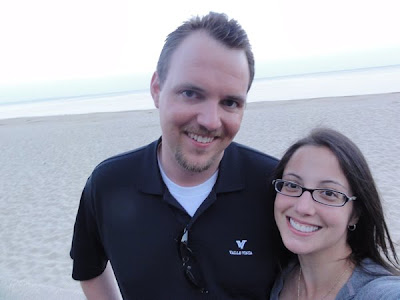 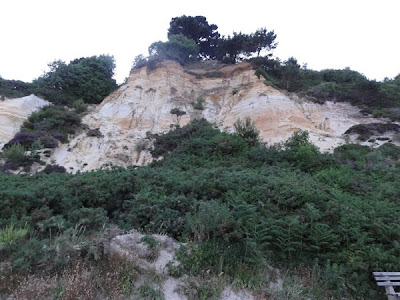 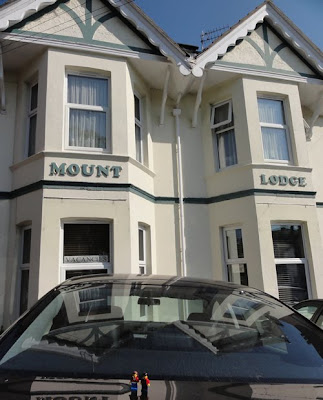 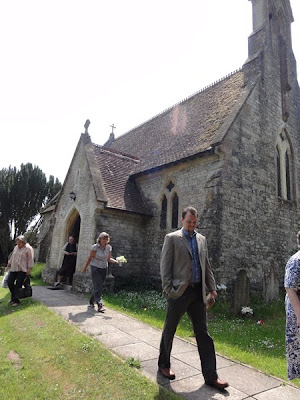 SUNDAY
The next morning, being the only Americans in a room full of Brits, they helped us with the B&B etiquette/breakfast routine.    After a "Full English" breakfast (Bacon (really, ham), Sausage, mushrooms, baked beans, grilled tomatoes, eggs, toast and jam) we headed to the cutest little Orthodox Church I've ever seen.

St.  Edward King and Passion-bearer Antiochain Orthodox Church.   This tiny church is actually the chapel for the HUGE Althelhampton Estate (A private home, whose gardents and cafe are open to the public).  The owner rents the chapel to this tiny parish at a very reasonable fee each month.  The parish (a full parish, not a mission.  they have their own priest), has resided here for nearly 15 years.

Josh and I brought the attendance up to a full 10 people (including the priest and 2 deacons).  Fr David, and his wife Anne, and even the rest of the parish, were truly the nicest people I think we've ever met.  Lots of stories here that may bore some of you, but it was just a wonderful experience.  We all had coffee over at the Estate cafe after Liturgy, and Ann purchased a beautiful icon from the parish's teensy bookstore.  (and for the other Orthodox readers, the commiunion wine was good...tasted like st geo back home)

then we were off to see the (naked) Giant carved into the side of the hill in Cerne Abbas. (sorry, the camera either wanted to focus on the lego people, or on the giant.   not both) 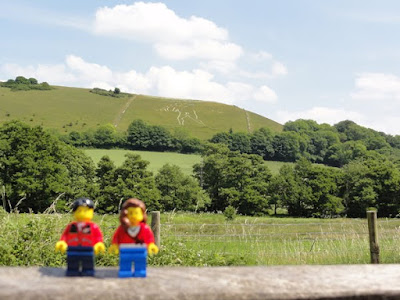 we stopped for lunch in Dorchester on our way to Portland Castle.  1) because we were hungry and 2) because our gps unit started going crazy.  it was confused.  we were on the smallest little back roads, on the sides of cliffs.  it was insane and we needed to stop to get our whits about us, and let the gps do the same...althought the stop didn't help the gps unit).

So we had a bite to eat in a little cafe and got out of there as fast as we could (bad vibes from the workers).  and we kept trying to find our way to Portland.  gps wasn't working.  we were winging it.  And before us we saw a sign for Chesil Beach.  Chesil Beach was on our "agenda" for after Portland Castle, but we decided to take this as a sign and went straight to the beach.  This was the most amazing beach we've ever seen... It's an 18 mile long beach, entirely of pebbles.  The further down the beach you go, the smaller the stones/pebbles get.  really.  the crunching of walking through the beach was crazy.  seeing dunes of pebbels even more so.  It's a very steep water edge, and a strong current.  Swimming is not allowed.  Only a few dozen people were at the same site as us.  it was the most peaceful beach we've ever seen.   The apples, and our Simpsons Uno game kept us occupied for several hours. and we left around 6pm.We also found out after the fact that taking just a single pebble from the beach is a national offense, with a severe fine if you're found out. Oh, and it was actually quite comfy to lay on the beach, as the pebbles smooshed to your shape.  walking was hard..and painful in bare feet.  flip flops proved difficult through. 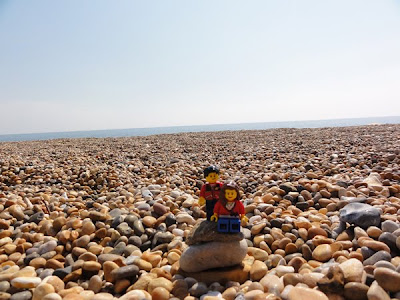 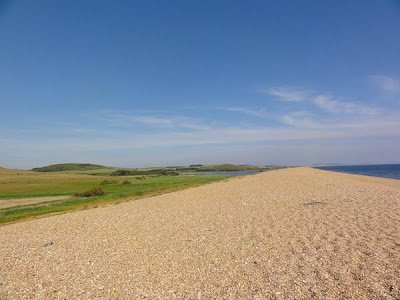 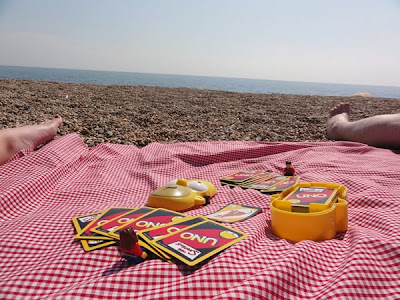 Back to Mount Lodge to get cleaned up, out to dinner, and a walk along Canford Cliff's (man-made) sand beach.

MONDAY
another Full English breakfast, a fun chat with our innkeepers as we checked out, and we were off to Old Wardour Castle.   Beautiful and romantic ruins.  Old Wardour Castle was incorporated into the garden landscape of New Wardour Castle (private residence still, not open to public). 'Robin Hood, prince of theives' (the one with kevin costner) was also filmed here. 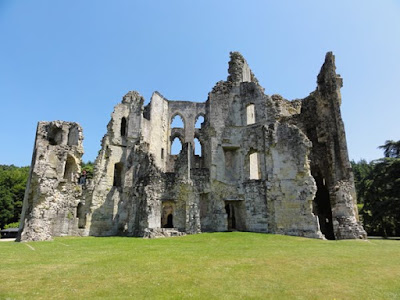 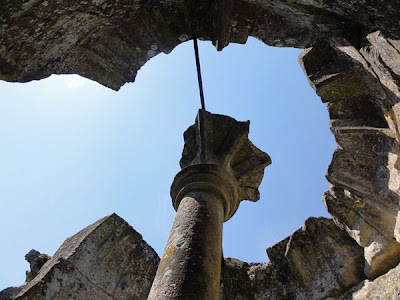 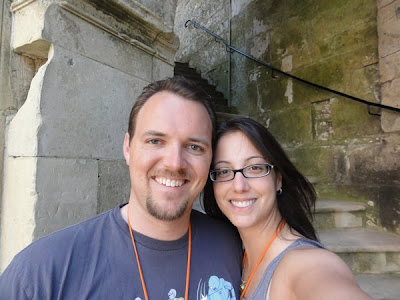 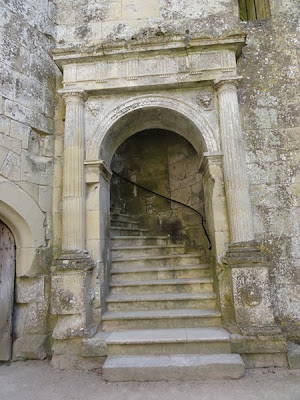 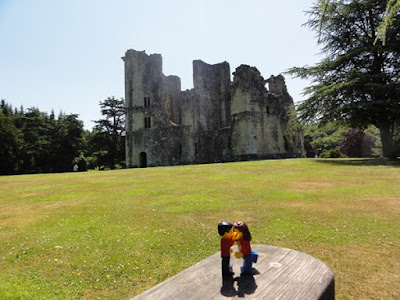 Several hours later we were on back on the road after having stopped at a really random little sandwhich cart off the side of a back country road.  For part of the drive, we were able to take their main interstate system back home to Derby, since we were trying to snake through the countryside to out of the way castles...we were finally able to avoid a roundabout every 5 miles.  (No overpasses here unless it's on the M road system, their main interstate routing).

We got home about dinner time, and got things ready to head back into to work today.

All in all a fun weekend...and we're leaning toward the idea of heading to a beach as often as we can while the weather out here is nice! we'll see.
Posted by Ann Clough, The Crown Lady at 5:27 PM