We are settled into our new Home...for the next month, at least.  Not quite sure what my feelings are about being here just yet...sleep will help.  But I am up for an adventure, so i'm still happy we came here.  And we had some fun on the way here:

At the Indy Airport (earlier I told family it was the Philly airport during our layover, but I was also sleep deprived, and not sure of what happened, when), anywho....at the Indy airport while waiting to board our flight and trying to relax after realizing I left my cell phone in my in-law's car, Josh and I had just ordered a couple of beer.  While waiting on our alcohol, we couldn't help but comment to the guys sitting next to us.  One had just come back from Zimbabwe.  He had a whole stack of money:  20 million dollar bills, 100 million dollar bills....and this, a fifty billion dollar bill.  Had to get a pic of Josh holding that kind of money.  It's really just pennies on the dollar...not worth much at all..but just seeing that value on money....very fun. 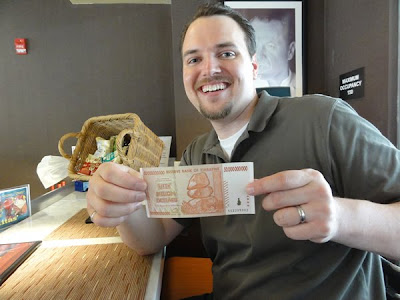 And then this was definitely at the Philly airport during our layover.  we were chugging across the airport to get to the int'l terminal, and saw a lego liberty bell.  we're lego fiends, and had to stop for a quick pic. 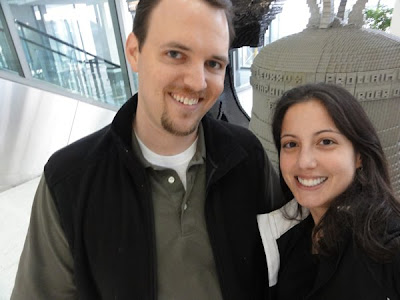 The flight from philly to Manchester was a lot more painful than i was expecting...our flight got delayed after we were already on the tarmac, so that added an hour and a half to the cramped quarters of our unexpectedly down-graded (size wise) plane.  Thunderstorms in the area.  But we finally took off, but we never did get very comfy for the flight, so we were and still are exhausted on the drive from the airport to our apartment.

We were shocked to lean the name of our driver:  John O'Hare.  A very well known football player in this area...and he even played for a team in Dallas back in his heyday.  He played for the famous/infamous football manager, Brian Clough.  Clough is a very common name in England, but pronounced "Clouff", rather than how Josh's family says it "Clo".  So we're Mr. and Mrs. "Clouff" here.  Watch the movie "The Damned United"...it tells all about Brian Clough and John O'Hare (although the movie too quite a bit of creative liberties with the truth.  Made for a very interesting conversation in the car.)

But the one last photo to show you before I zonk out for the night:  I just really like the side panel for this milk container (part of a few welcome items in our Kitchen). 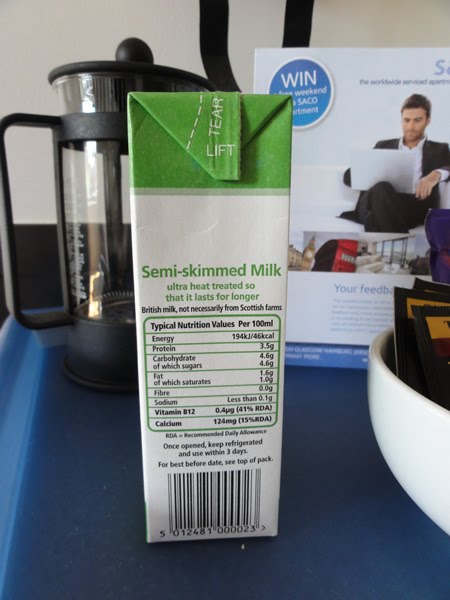